Inspirus is an employee engagement leader in the rewards and recognition space. Learn more about us.

Stay connected on everything going on at Inspirus and in the rewards and recognition space. 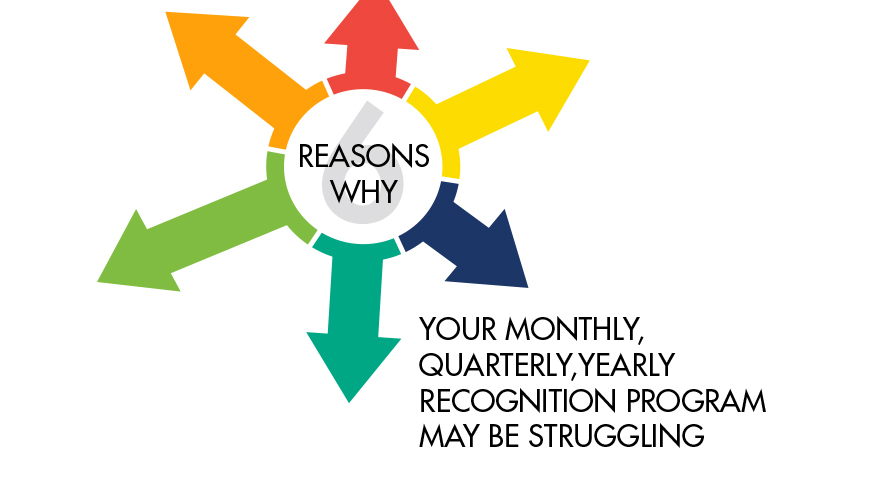 Most of the Monthly/Quarterly/Yearly programs promote a single winner for a defined period. The problem is often that if there are “winners,” then naturally there are “losers.” Many times, there are numerous submissions, but only one is selected for the reward and its accompanying perks of recognition. The net effect is often that other nominees feel their efforts fell short in comparison, or that they lost in a “pseudo contest.” In short, the most detrimental part of this structure is its very competitive nature. Any recognition program where one person’s success limits another’s is an ineffective system. The primary goal of every company is to make employees better than the competition—not better than each other.

The natural cycles of a business often contribute to variable submission rates. For example, in May three big projects may have been completed that were eligible for recognition. In June, fewer eligible projects were completed so there were fewer nominations. If there were 100 nominations in May, but only 15 in June, it creates a conundrum. Being the best of 100 is different than the best of 15.

Many of these programs also generate very few submissions compared to the number of eligible employees. This is usually the result of several factors—lack of clarity regarding the criteria, few winners in the past and rewards that fail to inspire. When you consider that nominees often become nominators at some point, a program that generates little enthusiasm from employees who “win” (and grumbling from the rest), is destined to suffer from low submission and participation rates.

Reinforcement and recognition are most effective when they are positive and immediate. Whenever a significant time delay occurs between behavior or performance and its recognition, the recognition loses some of its effectiveness.

Since recognition programs foster competition, they also create pressure among different business units or teams to ensure their group is well represented when awards are handed out. The typical dialogue becomes, “Sales received it the last two months, so it’s time for someone from the warehouse or IT to be recognized.” When this happens, the impact of your recognition program becomes diluted by a “pass-it-around” mind-set, rather than one linked to achieving performance standards.

Make sure your employees clearly understand the criteria of the recognition program. The purpose of a “Monthly/ Quarterly/Yearly” system is to make positive examples of employees who are role models—individuals who will inspire others to work hard to achieve the same standard. Many programs fail right at the starting gate because they don’t specify precisely what must be done to win the award.

The Monthly/Quarterly/Yearly” recognition structure usually selects a symbolic way to demonstrate appreciation, including certificates, plaques, personalized gifts or trophies. As a point of contrast, research has shown that most employees are motivated and inspired by rewards that offer choice, value and brands they trust. It is vital that rewards and symbolic awards are not only tied to the value of the performance, but that they are also items employees actually want.

There are also generational differences in attitudes regarding rewards. In general, Boomers tend to value symbolic recognition, while Millennials value gift cards and other awards that offer maximum choice and flexibility. To drive performance, the “what’s in it for me” has to be compelling so the award is valued by the person receiving it.